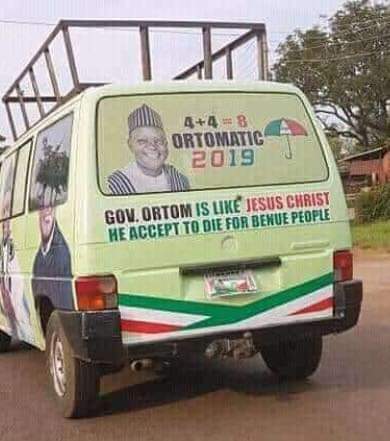 VEHICLE INSCRIPTION COMPARING ORTOM WITH JESUS UNACCEPTABLE
Benue state government has reacted to an inscription on a campaign vehicle that is currently trending on social media.This inscription has also attracted criticism and backlash from the general public.

A statement released from Government House and signed by Terver Akase ,CPS to the Governor dated 3rd Nov 2018,he condemned the inscription ,regarding it as heresy.Read the full statement

We have noted with dismay the circulation of the picture of a campaign vehicle which bears an inscription that compares the efforts of Governor Samuel Ortom for the people of Benue State and the sacrifice of Jesus Christ for humanity.

As a Christian, Governor Ortom regards the inscription as heresy as he would never at any time equate himself with Jesus Christ.
The Governor has never instructed anyone to make such an inscription and wishes to dissociate himself from it.

He also urges the people of the State and other Nigerians to disregard the inscription which might be the imagination of an overzealous supporter or the fabrication of political opportunists.

Governor Ortom has directed that if indeed such a vehicle exists, the owner should be requested to erase the inscription.

The Governor urges his supporters to always employ decorum in engaging with members of the public.

Soldier who died as result of alleged torture buried by Army in Abuja.

Fani-Kayode to sue blogger for N2bn over divorce allegation.

Soldier who died as result of alleged torture buried by Army...

Mimi Atim- Atedze - September 17, 2020
0
The signing of the bill into law was reported in a statement made available to the public...
%d bloggers like this: